Even though the existence of groundwater all throughout the Province of Entre Ríos was widely known, it was after the construction of Salto Grande Hydroelectric Dam, on the Uruguay River, that the first drill works let these "healing waters" out.

This hot groundwater, mentioned by all workers in the dam construction site at first and thrown into oblivion shortly afterwards, would become the tourist hope of many cities lying on the banks of the Uruguay and Paraná Rivers years later. These locations were longing for a "new attraction" capable of luring visitors year round.

The first of Entre Ríos hot springs was Federación, which still makes its denizens feel proud. As a result of the discovery of its hot spring waters, this city found a way of coming back to life after the old shell was flooded by the great lake.

Thus, cities like Chajarí (with natural cascades and pools), Concordia (with mineral and drinking water), Colón (ideal waters to be drunk before breakfast and to fight gastric disorders), Concepción del Uruguay (perfect to be enjoyed until the night falls), Villa Elisa (with salt waters), and carnival-loving Gualeguaychú (the closest to the Federal District) joined the Uruguay River Corridor. 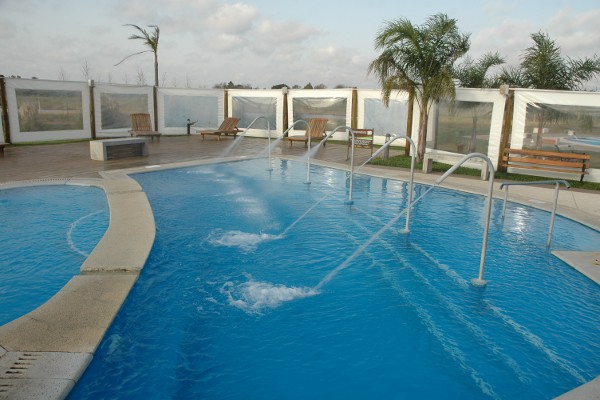 On the Paraná River (Paraná River Corridor), the hot spring waters have succeeded in attracting visitors to cities like La Paz (with waters containing four times the salt present in seawater, ideal to float and read the newspaper without getting wet), Victoria (right in front of nearby Rosario and the new bridge) and María Grande (minutes away from the City of Paraná, capital of Entre Ríos).

All the hot springs in the Province of Entre Ríos are impeccable and they are trying to add more and more services and thermal "details" every year in order to summon tourists from all over the country to come along and relax, rest and especially enjoy that vital liquid, so necessary for life: water.