Iguazú Falls - Photo: Eduardo Epifanio
Tourism in Misiones continues to conquer thousands of travelers who come along every year to enjoy its natural tourist attractions, which have increased considerably in the last few years with the incorporation of cultural and historical destinations. All of this framed by the province famous red soil, its waterfalls and its impenetrable rainforest.

The Iguazú Falls and its footbridges mingled amidst the environment invite visitors into the rainforest to get close to these falls that reach their ultimate expression in the far-famed Devils Throat. Puerto Iguazú, the closest city, is the starting point for the many outings to do in the Falls region that cause admiration, from populations that still dwell in the rainforest, through incredible wildlife reserves to historical sites and museums.

A series of towns that show off the idiosyncrasy of Misiones unfold along National Route 12 leading to the City of Posadas, capital of the Province of Misiones. Some of them are Eldorado, Montecarlo, Puerto Rico, Jardín América and San Ignacio, renowned for the unmistakable orange hue of its Jesuit Ruins and for having sheltered one of the most significant writers from this region: Horacio Quiroga

In the center of Misiones there are other districts that perfectly combine the low mountain ranges with the rainforest and the red soil. For instance, Santa Ana is well-known for its gigantic cross and viewpoint, and Oberá is one of the most prosperous cities in the province, where the European immigrants introduced their customs and traditions.

Provincial Route 2, one of the most eye-catching in Argentina , runs parallel to the Uruguay River and displays small towns that represent ideal tourist destinations. It leads to the City of El Soberbio, access gate to the celebrated Moconá Falls . This place is becoming worldwide known "because the river runs sideways". A must see. 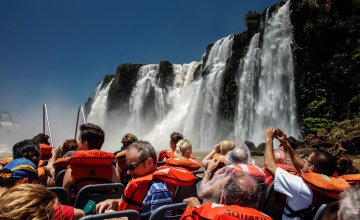 Voted as one of the 7 Natural Wonders of the World, Iguazu Falls is undoubtedly the most visited place in Misiones and one of the most imposing natural attractions in Argentina and the World.

There are more than 270 falls in an area where cliffs and islets are scattered in a half moon. From the visitors center you can walk around trails or in a picturesque train. 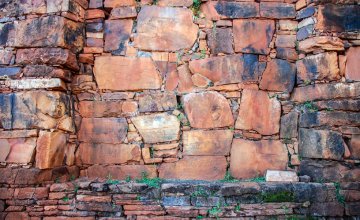 We traveled inland in the Province of Misiones. This time we visited the famous Ruins of San Ignacio Miní, declared World Heritage by UNESCO.

We set out with great expectations. We would be visiting one of the most emblematic Jesuit reductions in America, the one featuring the best restoration conditions as compared with other reductions in the Order. 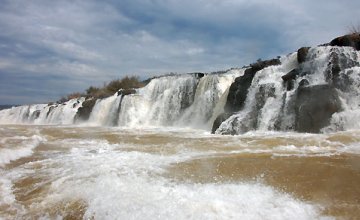 Imagining that the course of a river falls sideways sounds illogical, as if it was a description in a science fiction story. But such a place exists and it is called Saltos del Moconá.

A geographic feature makes the river to be higher on one margin. As a consequence, when the volume of water is low, the waters fall on themselves sideways.