A Ride around the Port

The Port of Comodoro Rivadavia stands out for its constant activity. A visit to its facilities let us catch a glimpse of a South American Sea Lion colony from a close distance.

This amazing circuit lies among the traditional tours in the area. It displays a long pier and the constant movement of ships and goods, while breathing in the fresh sea breeze. 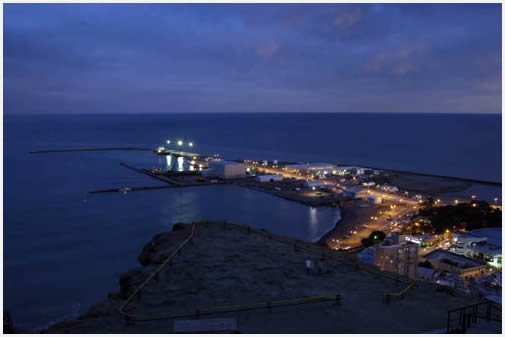 Very close to the center of the City of Comodoro Rivadavia, the port is a must visit attraction. Its modern facilities provide the chance to go for a walk. A good excuse to observe the district from a zone where the sea will be our companion.

A somewhat sunny morning with a soft wind found us walking towards the ocean drive to the docks. First of all, we observed the area where oil operations take place, which has its own quay. Very unsuccessfully, we tried to imagine how many tons could be stored in the huge tanks and think about the days on which oil extraction was at its zenith.

We headed for the docks to see the various tasks carried out there. There are three areas where goods are loaded and unloaded and where men and machines work intensely. On the fishing platform, we saw countless small colorful barges that usually come back from the sea with their holds full of prawn and spider crab. Once on solid ground, the sheds store the deep-sea fishing until it is shipped to the national and international market.

Overseas vessels are moored in a special sector sheltered from the prevailing winds and the sea assault. This is long dock with an important retaining wall and nine meters of depth to moor large vessels. For many years, ever since the early days of the oil industry, it was complicated to anchor ships. Ever since 1996, when this quay was inaugurated, mooring has been divided into zones and modern facilities have been installed. The works were done with the purpose of turning this into an Atlantic head for the southern bioceanic pass and in order to associate it to tourist and sports activities.

Eventually, we went to the vast pier that gets over 200 meters into the ocean and restrains its strength. we zipped up our jackets to fight the wind and the cold temperature. Then we walked to the end of the pier. The seagulls were struggling to get some food over the fishing boats and then hovered over our heads squawking.

We came across a South American sea lion colony. The animals were lying on the rocks, resting and enjoying a sunbath.

As we left the port, we went past the square called Jardín del Puerto once again and walked on towards the ocean drive. The aroma of the sea specialties served at the cantinas and restaurants encouraged us to have lunch at one of them.

We also resolved to have a look of the port at night from the city. It was lit and attractive as if it was broad daylight. Both versions were extremely interesting.

How to get here: National Routes 4 and 26 reach the access to the port and connect it to the rest of the roads across Patagonia, the mountain range and Buenos Aires.

Bear in mind: Given the constant activities carried out at the port, careful attention should be paid to the sign posts and the port authorities.
Tour duration: 2 hours.