A Tour around The City

Seeing the extensive urban grid of Comodoro, its sea shore and discovering its cultural and historical heritage contributes to finding out its authentic idiosyncrasy.

The economic and social development of the metropolis has boomed in the last century. Today, it boasts interesting attractions that involve its oil present and past.

There is nothing better than wandering the streets of Comodoro Rivadavia to see its distinctive traits and perceive the lifestyle of its denizens as well as learn about its most recent history. Each nook unveils the thriving growth resulting from oil finding.

Our tour began in the southern area, the oldest in this urban settlement. It concentrates the commercial center and the historical shell. Besides, it is the most densely populated. After that, we headed northwards, where the beginnings of the oil and railway industries are rooted. There lies the epicenter of the first campsites organized for these two activities.

It was easy for us to find the most representative buildings of Comodoro. Saint John Bosco's Cathedral, with its slim tower and its modern Gothic lines, is located at a strategic point in the center. Very close, lies Escuela Provincial N° 83 and Mary Help of Christian's College, two of the education houses that witnessed the growth of the city.

Some buildings give evidence of the influence of a great deal of foreigners who have come to stay, tempted by job opportunities. Cine Teatro Español, Asociación Portuguesa, Centro Gallego and Colectividad Chilena are just some of them and they show the presence of ethnic groups coming from different locations to contribute their workforce to the oil industry. Its traditional festivals have earned Comodoro Rivadavia the title of Argentinian Capital of Foreign Communities.

Other old and deeply-rooted public institutions still maintain their façades as a tribute to their significance. These are Comando IX de Brigada Mecanizada, Correo Argentino, the Town Hall, the former railway station and the former power station located at the port (CEPTur).

We went towards the seafront in order to visit the docks and admire the feverish activity taking place in all these areas. To one side, the beautiful park called Soberanía Nacional (National Sovereignty), also known as Jardín del Puerto (Port Garden), displayed its ample landscaped spaces and its recreational area. It has been named after the Malvinas heroic deeds.

The tour around the city is never-ending and we would have needed much more time to see it thoroughly. We rescued part of its oil past and the preservation of its tradition and culture, in addition to the interesting accommodation and gastronomic infrastructure. For such reasons, it is well-known as the access to the Central Patagonia tourist corridor. Comodoro offers a thousand excuses to pay a visit, research its origins and, above all, appreciate it. 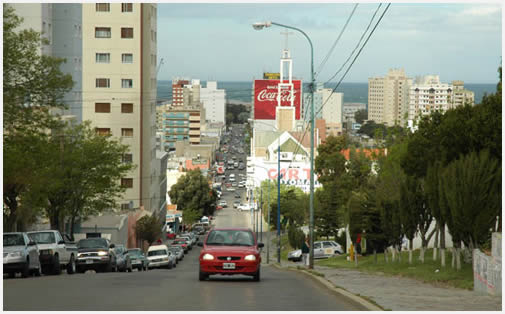