This beautiful church, standing opposite the main square, is one of the jewels in the City of Victoria. In addition to going to mass, visitors may go in and appreciate its architectural features.

This beautiful church, standing opposite the main square, is one of the jewels in the City of Victoria. In addition to going to mass, visitors may go in and appreciate its architectural features. 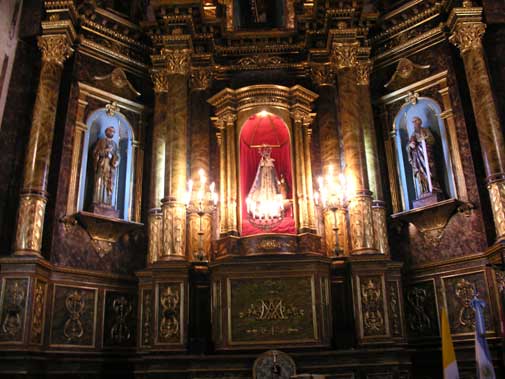 Around 1469, the Basque country was being hit by war and drought. Thousands of people were praying for water and peace. The story goes that Rodrigo de Balzátegui, a neighbor from Oñate, found the image of a sitting virgin who was holding a world in her right hand and Infant Jesus in her left hand. The virgin was in an espinillo wood. When he saw it, Rodrigo exclaimed in Basque the word “arantzazu”, which means “spine or spinal”. Afterwards, he returned to the village to tell the story of this virgin and he succeeded in turning that place into a site for praying.

A group of young people accepted the proposal and built a kind of altar in that spot. The first miracle attributed to the Virgin happened a few days after this event, when a huge rainstorm fell over that village and lasted for several days. The truces the Basque people negotiated some months later were the second miracle performed by the Virgin. 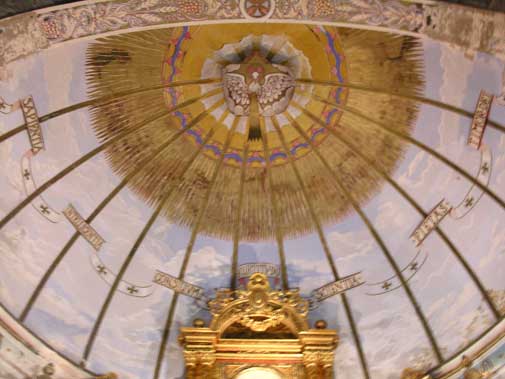 This image found by Rodrigo de Balzátegui is the one worshipped today at the Basilica of Our Lady of Arántzazu. It was proclaimed patron saint and founder of Victoria in May 13, 1810. This date is considered as the anniversary of the city, as the first local mass was celebrated then.

What used to be a shack made of adobe and straw where God was worshipped today has turned into one of the most beautiful religious architectural works in our country.

The architecture of the chapel dazzles visitors at the very entrance. Both night and day, dozens of people stand in front of it in order to appreciate its solid, square towers that, even if they contribute with the atmosphere of a castle, they also harmonize with its windows. The famous and well-known rose window symbolizes the birth of faith in the Christian church. 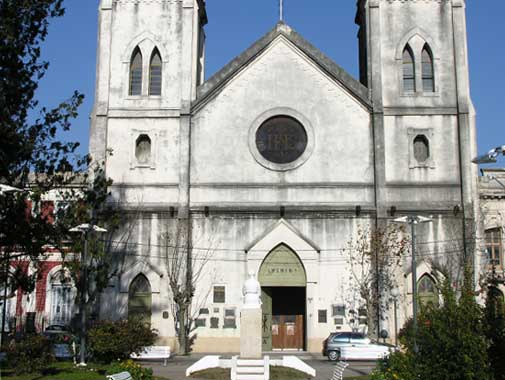 Crossing its two large wooden gates is entering a new world, whether there is religious fervor or not. The image of the Virgin housed there today, which has been there since 1810, was brought from Spain.

The paintings that may be appreciated there were made by the Argentinian artist José Augusto Fusillier, who finished his frescos in 1955. All these paintings refer to various biblical extracts, except the work “King of Kings” (which stands to the left of the altar), and was the result of pure inspiration.

Whatever religion one believes in, if any, the site offers a unique story that makes us feel closer to this old but coquettish city.

Bear in mind: The church stands opposite the main square. It is possible to visit it while mass is being celebrated, but is also open during the day. Guided tours may be hired at the city’s Tourist Office.