Bermejo River - Formosa (photo: Carlos Ramos)
Formosa is located in northern Argentina and shares a border with the Province of Salta on the West and with Chaco on the South. Its geography is rich in rivers, ponds and wetlands, which make it one of the most humid in the country. It also shelters a wide array of wildlife species.

The origin of its name is related to a "bend" in the Paraguay River the Spanish conquerors came to call "Vuelta Fermosa" (which stands for "beautiful bend" in old Spanish). A Jesuit reduction settled down at this spot in 1673. It was dwelled by missionaries and native Guaraní peoples.

Surrounded by the Pilcomayo, Paraguay and Bermejo Rivers, its territory remains mostly unexplored and today invites adventure travel enthusiasts, as well as tourists in general, to enjoy its amazingly unspoiled scenes. Some of the attractions of the province include Guaycolec Natural Reserve, Isla de Oro and Tortorelli Forest Botanical Park.

Clorinda, Las Lomitas, Comandante Fontana and Espinillo are the most important cities in the province. In addition, the House of Government, the façade of Our Lady of Carmen Church Cathedral and the new Waterfront Promenade and beaches on the Paraguay River stand out among the luring architecture of the capital city.

The River Croaker Festival, the Encounter of Native Peoples of America and the Grapefruit Festival are held every year. These three celebrations welcome visitors from all corners of the country. 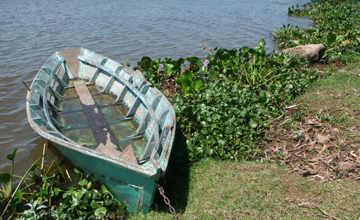 Fishing in the Pilagá Brook

Before going to the outlet of Pilagá, we stopped to observe the Chapel of the Virgin of the Port. Sixteen imperial palm trees welcomed us through a little path until the entrance of the temple.

Inside, we contemplated the virgin´s image and the colourful vitreaux on both sides. Religious silence could be breathed in the dense air and invited us to take some time for meditation. 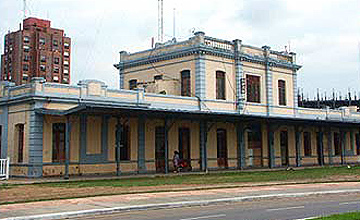 Always facing the river, you will get to the exact point where on April 8th, 1879, Commandant Luis Jorge Fontana founded the city attracted by the huge ravines being 20 meters tall that let you see beyond them a thick and perennial vegetation.

Since then, the Capital started to receive a great influence of European people, most of them coming from Austria or Italy, and, together with native communities gave a progressive spirit to the region. 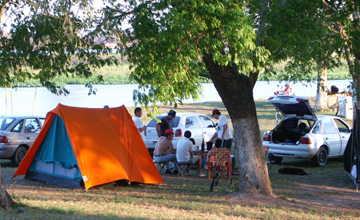 Years before, this area had already received a settlement through a Jesuitic Mission which was called Mission of Timbó, founded in 1763 by Father Martín Dobrizhóffer and inhabited by Abipones. The name of the camping site has this origin since "Chuqui" was an Indian Chief of the tribe that colaborated in an intense way with one of those missions.