Lake Fagnano - Tolhuin (photo: Jorge González)
The Province of Tierra del Fuego comprises Isla Grande, Argentinian Antarctica and the South Atlantic Islands. Despite being on the southern end of the country, the former is the most popular among visitors, maybe because of its must see natural charms. Ushuaia is the capital city and a first-class tourist pole accessed either through National Route 3 or by air.

Separated from the continent, Isla Grande is shared with Chile and it features seashore on the east and south. Three well-defined sectors may be identified when traveling around the Argentinian area.

In the north, the relief is made up by high plateaus and plains with scarce vegetation made up by grass. Guanacos, foxes, sheep and cattle may be seen when toured by car. There is also the chance to observe the sea horizon. On the Atlantic, the City of Río Grande stands out within this semi arid climate with mildly cold temperatures. Some estancias open their gates to tourists interested in seeing the typical rural tasks.

In a transition area in the center of the province, there are soft undulations, some ponds and peat bogs. The Municipality of Tolhuin is located there at the head of Lake Fagnano, access to the Andean Patagonian forests. 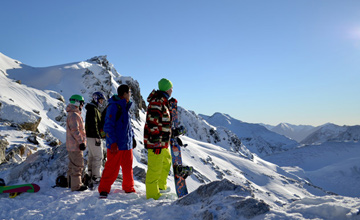 Southern and young from all points of view, ever since its opening, Cerro Castor has welcomed more and more visitors not only from Argentina but also from all over the world. They come along to the City of Ushuaia to enjoy excellent snow.

Very close to the end of the world, where the sea and the mountains meet before the eye of the tourist, Cerro Castor ski resort lies just 195 meters MSL and its top reaches 1,057 meters. 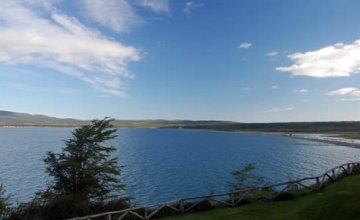 The impressive image of Lake Fagnano stands out between the mountain and the wild high plateau. Its vibrant blue shades become choppy as the southern wind shapes waves that break on the shore.

"Khami" or "Large Water" was the name given by the Ona natives or selk´nam to the lake. Nowadays, it carries the name of Monsignor José Fagnano. One of the first Salesian men to be sent by Juan Bosco to Argentina, he occupied the charge of first Apostolic manager in the region. 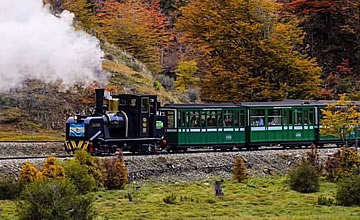 The End of the World Train

It is, according to many visitors, one of the most emblematic tours in Ushuaia. All it takes is boarding a train to travel back in time to a special past. Prisoners, jail and bitter, bitter cold.

Although the engines and cars are not the same, the route remains unchanged providing a unique experience. The journey is the one convicts made every day to the forests around the town to gather wood not to freeze to death, and the train solved the problem.