(photo: Jorge González)
The Province of La Rioja features dreamed-of scenes in the Andes Mountain Range which turn out to be perfect for adventure travel and outdoor activities.

In addition to its winery tradition, olive oil making has become quite successful in the last few years, with family businesses scattered all around the province and becoming an attraction themselves.

Besides its capital city, La Rioja has other two emblematic districts as far as tourism is concerned: Chilecito and Villa Unión. The three of them conquer visitors who are lured by the natural beauty of its geography and the cultural activities available at these locations.

Small Famatina is one of the most avant-garde cities in La Rioja. Well-known for its mining history -today open to visitors through La Mexicana-, its high hills summons air sports enthusiasts, being paragliding and hang-gliding the most popular options.

The festival known as La Fiesta de la Chaya Riojana is a national event that is becoming increasingly fashionable. Local and international artists perform on stage and thousands of tourists want to take part in the celebrations in which flour is in charge of whitening all attendants.

History, landscape, people and much color turn this province into a must visit in our Argentina. 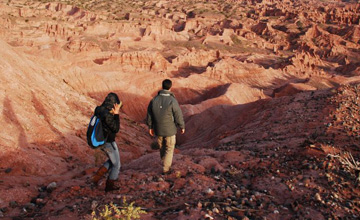 The winding road crosses this desert that used to be a tropical forest with large ponds and lush native wildlife 225 million years ago. The truck went across a dry bed, in this case of the Guabo River.

"Talampaya" stands for "tala´s dry river". The name with which the native peoples referred to the area gives evidence of the fact that these rivers remain dry during most of the year. They only become rivers again when it rains, which does not happen very often. That is why they are used as paths to reach certain spots. 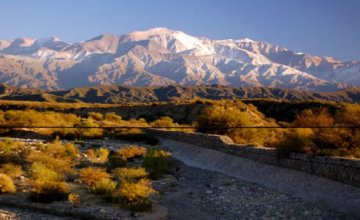 A clear morning with cool air predicted an ideal day to visit the famous Cuesta de Miranda, a place promising big rocky outcrops of changing shapes and intense red color. There we went.

The immensity of Famatina Hill, with its eternal snow, was the silent witness of our tour along the way. The contrast of the snow-capped summits with the blue sky and the green mountains creates a perfect postcard to keep in our minds. 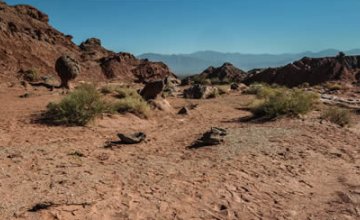 These formations were created during the Paleozoic Era, in the Carboniferous period, which dates back to approximately 360 million years ago. The rocks are made up by sedimentary material like solidified sandstone which were dissolved by the rain and the wind and adopted strange forms.