A Museum Devoted to Dinosaurs at El Chocón

Twitter Facebook Mónica PonsEduardo Epifanio
Each room presents detailed bone replicas and information about the life of dinosaurs in an amusing and highly valuable scientific sample. The elements used by paleontologists during the searches are also on display. 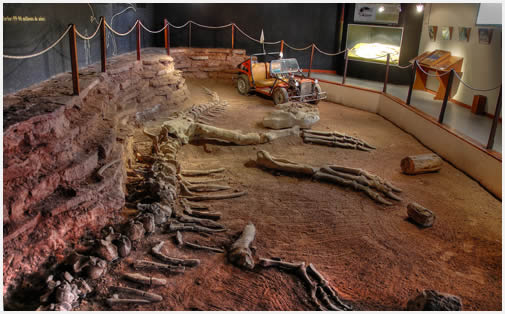 The presence of the life-size replica of a dinosaur at the access to Villa El Chocón made us look for further information about the museum. We felt intrigued to understand how they disappeared from the face of the earth.

Historical facts are clearly exposed in books and bibliography. The dinosaur theme museum would give scientific answers to our query.

At a small venue, Ernesto Bachmann Museum has managed to offer amusing and lively visits that turn this ancient topic into a dynamic activity. Several young guides were in charge of letting us know the details about the findings and their studies.

Maybe lured by the movies and series starred by dinosaurs, many small children toured around the facilities with us. They were astonished and excited. 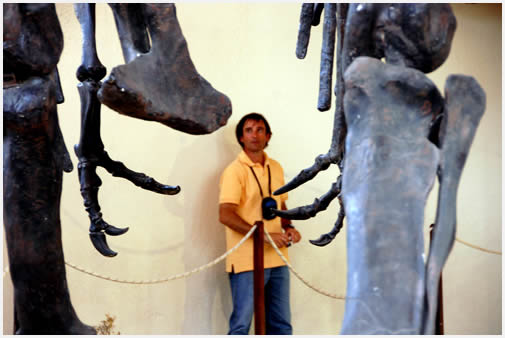 We started with the museums main course, the largest carnivorous dinosaur skeleton at the moment it was discovered: Giganotosaurus carolinii. The hall is fully devoted to this southern reptile that lies on a sandy floor. This valuable piece was found a few kilometers away from Villa El Chocón.

The name of this dinosaur is made up by its scientific identification and the name of its discoverer, Rubén Carolini. Carolini worked for the firm Hidronor S.A. for many years and he would accompany paleontologists in their searches in his free time. It was 1993 when he found the tibia of a dinosaur emerging from the ground. He gave notice of his finding and specialists from Universidad Nacional del Comahue did the rest: they withdrew 80% of this animals skeleton, piece by piece.

Hard excavation works, findings and studies followed. It was not until 1995 that the museum to place the giganotosaurus was inaugurated by request of Mr. Carolini, in order to spread this knowledge. 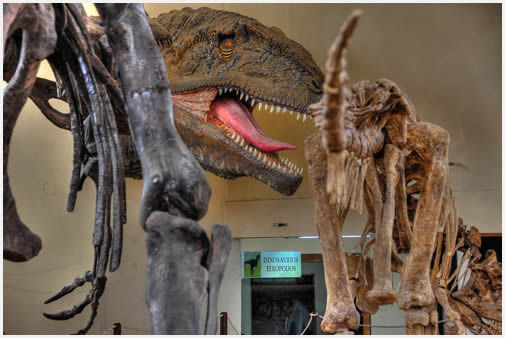 We passed onto the second room, where two life-size replicas seemed to devour us with their presence. One of them was the giganotosaurus and we confirmed its size, which according to what we had been told was like a long-distance double-decker bus.

From below, we could observe its large jaw and the attitude of moving about with heavy strides. How far could they go? What did they eat? How intelligent were they? Were they aggressive?

The morphology of the area and the changes in the Andes Mountain Range let us know exactly how they lived around 100 million years ago, during the Middle-Late Cretaceous. When our guide finally ended the concept, we started to make questions.

We became aware of the importance of the Neuquén basin as far as these findings are concerned and we found out that there are other theme museums at Los Barreales and Plaza Huincul open to visitors. All of them offer a great deal of information, both for laymen and scientists. 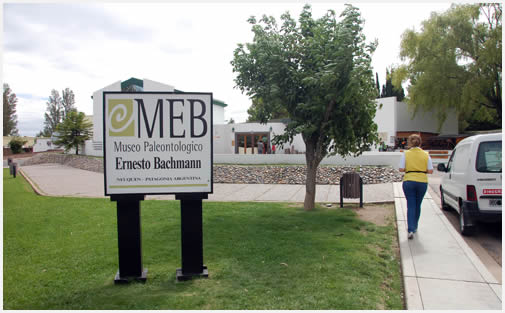 In the next rooms, we could observe dinosaur replicas made by paleoartists. There is a scientific correlation between specialists and these artists in order to manage the best image possible of these animals.

Children can take part in a program called Paleontologists for a day. They may play to discover bones previously hidden outdoors in a sand deposit. Aided by a shovel and a brush, they are taught about this science and what they should do if they happen to find fossils.

It is essential to study the site where the findings took place. Context is vital and information may be lost if the fossil is moved. In some areas, a sea bed was confirmed to co-exist with the findings of animals that would dwell on solid ground. In different geological eras, of course, said the director of the museum, Rocío Butin.

Thus, one at a time, the museum specialists answered all our questions. We came to the conclusion that, as far as herbivorous or carnivorous dinosaurs are concerned, El Chocón Museum is an avant-garde information source.

Very ample, changes from summer to winter (make sure by phone).

Special guided tours for schools.
A general ticket is charged and it includes the guided tour.

« Back to Outings in Villa El Chocón